Neanderthals Are Not Part Of The Ancestry Of Man

Two of the most hotly debated issues in the study of human origin (paleoanthropology) focus on the origin of modern humans, Cro-magnoids or homo sapiens sapiens, and their relationships with Neanderthals.

Roughly 300,000 years ago, the Old World was occupied by a morphologically diverse group of hominoids (any primate of the family Hominidae). In North America, Africa and the Middle East there were Homo sapiens; in Asia, Homo erectus; and in Europe, Homo neanderthalensis. By 130,000 years ago, Neanderthals had all become so anatomically distinct, that they were classified as a separate species – Homo neanderthalensis.

Then, approximately 50,000 to 60,000 years ago, our ancestors suddenly appeared on this planet. Instead of living cooperatively with apes (homo sapiens) and Neanderthals, who had been at the top of the planet’s food chain for almost a quarter of a million years, humans exterminated Neanderthals globally within 25-30,000 years. Humans are still exterminating apes.

The Lewis Theory of Human Exile, an alternate theory of the human origin, claims that neither apes or Neanderthals are part of the ancestry of man on Earth. Neanderthals and apes were victims of humans, not their ancestors. There is a vast amount of proof of this.

Are All Neanderthals Extinct?

To date, no Neanderthal skeletons or specimens more recent than 25,000 years ago have ever been found. However, that does not mean that Neanderthals are necessarily extinct. In fact, there is every possibility that what we identify as Yeti, Sasquatch and Bigfoot today are actually Neanderthal survivors.

Are Neanderthals The Ancestors Of Humans?

What Happened To Neanderthals?

There has been a great deal of effort by evolutionists to ‘construct’ an evolutionary link between Neanderthals and Cro-magnons over the last couple of hundred years. None have ever been successful. In fact, more than few of the attempts were scientifically proven to be intentional frauds. The rest were revealed to be nothing more than wild and optimistic speculation. Bones of humans and Neanderthals have been found together in ancient grave sites, but were the result of fatal confrontation, not friendly cohabitation.

Currently accepted evolutionary charts depict humans evolving from ape to modern man, in a progression of height from the smallest to the largest. But they are anatomically wrong. For if evolutionists are right, the forms just before modern man would be great apes and Neanderthals, which would have been significantly greater in size compared to modern man; meeting the description of what the ancient people called ‘giants’.

NOTE: Many of the academic community have inaccurately portrayed the early artists as Neanderthal man, but humans exterminated Neanderthals thousands of years before the art was created. The oldest ‘prehistoric’ cave drawings and paintings, petroglyphs and other forms of stone art were estimated to be from 20-25,000 years ago. Recently a new cave drawing was determined to be approximately 40,000 years old, nearer the time of our sudden appearance on Earth, and the end of Neanderthal reign.

Proof That Neanderthals Are Not Ancestors Of Humans 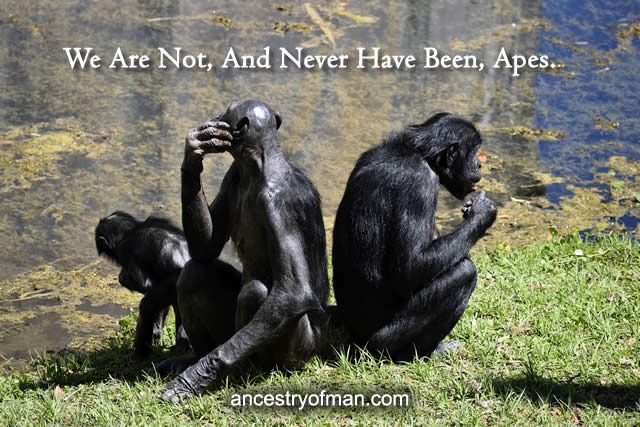 Evolutionists celebrated wildly when the skeleton of a child was unearthed in Lapido, Portugal in 1999. Testing dated the remains to be from around 25,000 years ago, and it was said that the remains showed a mixture of Neanderthal and modern features. This suggested that it may have been a hybrid, possibly even the proverbial ‘missing evolutionary link’. But, evolutionary hopes were dashed when small fragments of DNA extracted from three different specimens of the child revealed that it was not closely related to any present day human populations.

The DNA extracted from the ribs of a Neanderthal infant buried in southern Russia 29,000 years ago, was also found to be too distinct from modern human DNA to be related. “There wasn’t much, if any mixture, between Neanderthals and modern humans,” said William Goodwin, of the University of Glasgow, UK. “Though they co-existed, we can’t find any evidence of genetic material being passed from Neanderthals to modern humans.” The work published in the journal Nature, contradicts evidence from ancient remains of a child found in Portugal, later proved wrong.

The bones from the Russian Neanderthal infant were very well preserved, and the child must have been among the last of the Neanderthals as they died out about 30,000 years ago. Research, by Dr Goodwin, along with Swedish and Russian colleagues, agrees with the findings of the first analysis of Neanderthal DNA in 1997. That study of DNA, taken from the first Neanderthal skeleton found in the Feldhofer Cave in Germany in 1856, supports the theory that modern humans replaced Neanderthals.

According to Dr. Goodwin, the DNA sequence from the infant was very similar to the specimen from the Feldhofer Cave, proving that there was little diversity among Neanderthals. “If they had been very diverse at the DNA level, they could have encompassed modern humans. The fact that these two Neanderthals are closely related, and not related to modern humans, implies that they don’t have the diversity to encompass a modern human gene pool,” said Dr. Goodwin.

DNA comparisons also showed that different ethnic groups cannot be genetically identified (there is no ‘race’ gene in us), nor do we have any direct genetic links to Neanderthals. In a commentary on the research in Nature, Matthias Hoss of the Swiss Institute for Experimental Cancer Research, said the two studies provide the most reliable proof so far of the authenticity of ancient DNA sequences. The similar features of the two samples “argues against the idea that modern Europeans are at least partly of Neanderthal origin,” he said.

Another study by a group of geneticists, coordinated by Guido Barbujani and David Caramelli of the Universities of Ferrara and Florence, showed that a Cro-Magnoid individual who lived in Southern Italy 28,000 years ago was a modern European, genetically as well as anatomically. The Cro-Magnoid people briefly coexisted in Europe with other humanoids, the Neanderthals, whose anatomy and DNA were clearly different from ours. However, obtaining a reliable sequence of Cro-Magnoid DNA was technically challenging. “The risk in the study of ancient individuals is to attribute to the fossil specimen the DNA left there by archaeologists or biologists who manipulated it,” Barbujani says. “To avoid that, we followed all phases of the retrieval of the fossil bones, and typed the DNA sequences of all people who had any contact with them.”

The researchers wrote in the newly published paper: “The Paglicci 23 individual carried a mtDNA sequence that is still common in Europe, and which radically differs from those of the almost contemporary Neanderthals, demonstrating a genealogical continuity across 28,000 years, from Cro-Magnoid to modern Europeans.” The results demonstrate for the first time that the anatomical differences between Neanderthals and Cro-Magnoids were associated with clear genetic differences.

The Neanderthals, who lived at the top of Earth’s food chain for nearly 300,000 years, were not the ancestors of modern humans, they were the victims of modern humans. So, where did our superior intelligence come from? The theory of human exile onto a prison planet states that human intelligence is not the result of evolution, as we have been led to believe, but rather the direct result of genetic memory.