For thousands of years UFOs and aliens have been drawn and painted by artists all around the world.

Artists have used alien and ufo art to document visits from aliens and ufos for a vey long time. They each felt a duty to document UFO sightings and alien visits, with remarkably similar forms despite the vast differences of geography and time. Was it an amazing coincidence, or did they all see similar things?

Here is a small sample of UFO and alien art from around the world going back almost 30,000 years. 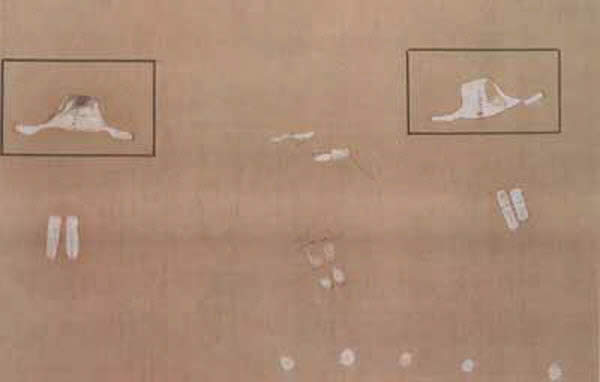 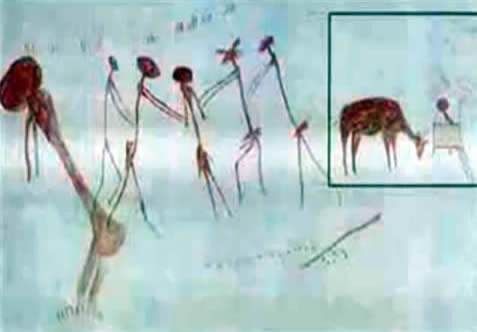 Cave painting from Kolo Tanzania estimated to be up to 29,000 years old showing four entities surrounding a women. There is also an entity looking down from inside some sort of box or object. 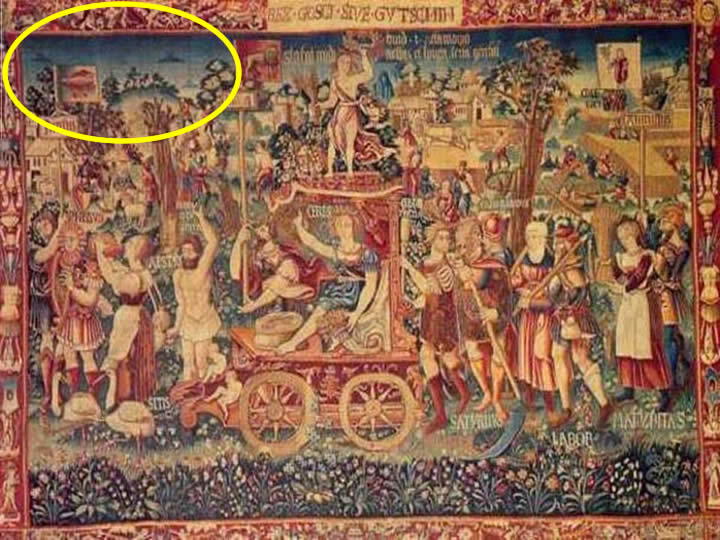 Tapestry from 1538, named Summer’s Triumph, that hangs in the Bayerisches National Museum. If you look at the top corners, you can see what could be described as flying saucers, or UFOs. A few people believe these are just clouds, but the minds of artisans portray their visions, and this could easily be a case where the artist(s) definitely intended to add UFOs. 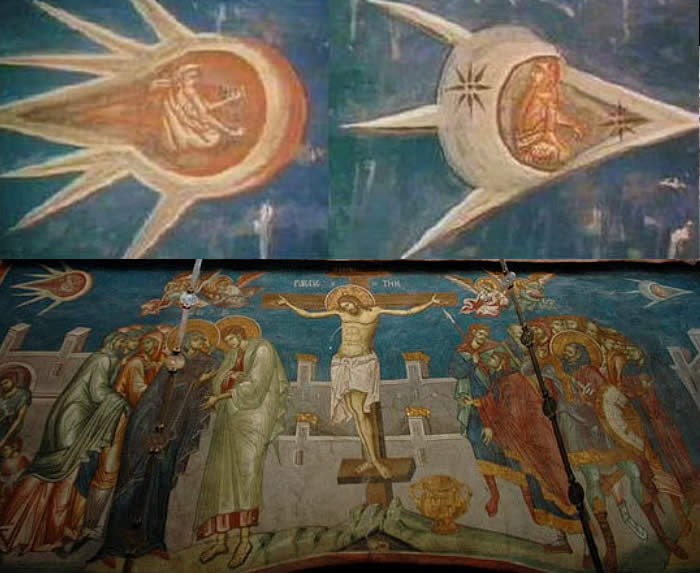 The ‘Crucifixion’ – painted in 1350, depicts a small human looking man looking over his shoulder, at another UFO in pursuit, as he flies across the sky in what is clearly a space ship. The painting hangs above the altar at the Visoki Decani Monestery in Kosovo, Yugoslavia.

The French Jeton was used in substitution of legal tender in games. The one on the far right, from 1680, shows what appears to be a UFO flying in the air. It has an intriguing Latin inscription that translates to “It is here at an opportune time”. 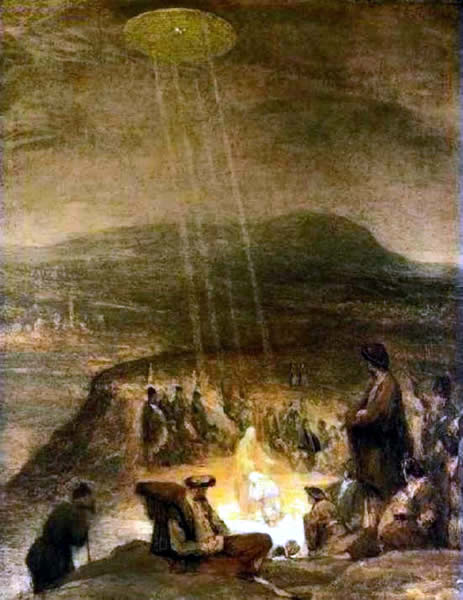 The ‘Baptism of Christ’ was painted in 1710, by Aert De Gelder. This is one the finest UFO and alien depictions in ancient art. A UFO shines light on Christ, as John baptizes him. It could be interpreted as a divine being, but its uncanny resemblance to common UFO descriptions, leaves little doubt about what it was meant to be. 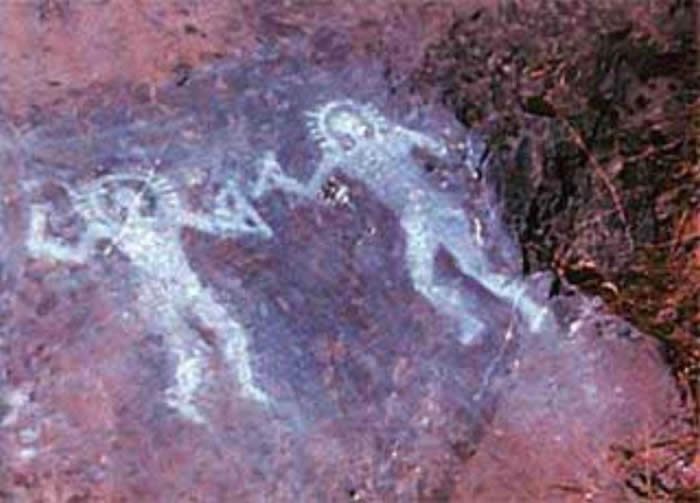 Cave painting from ca. 10,000 BC, is from Val Camonica, Italy. It appears to depict two beings in protective suits holding strange implements. 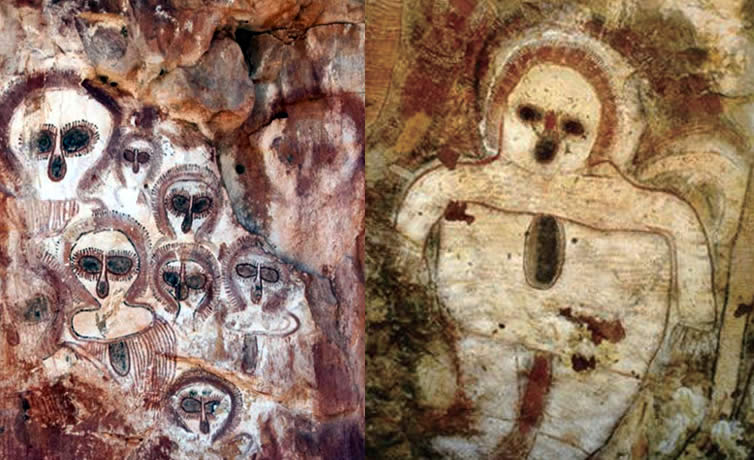 Wandjina cave paintings from Kimberley, Australia estimated to be 5,000 years old, and is believed to represent alien beings.

From the works of Admiral Blaeu, in “Theatrum Orbis Terrarum”, the first true modern atlas, written by Abraham Ortelius and originally printed on May 20, 1570. This painting documents an encounter that happened when, while at sea, Dutch ships sighted two disk shaped objects hovering in the sky. 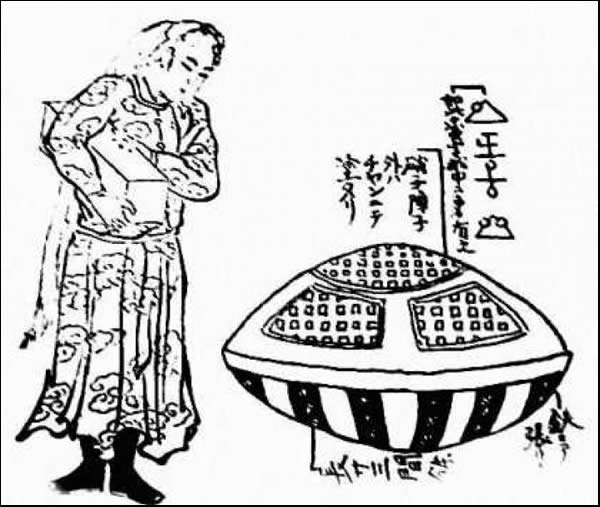 This UFO painting is from 1803. There was a book written about it, Ume No Chiri, that said a “foreign ship and crew” was spotted on the shore of Haratonohama, Hitachi, Japan. The UFO was made of metal and glass, and had strange writings on it. This is the artist’s rendition of the flying saucer, or spaceship. 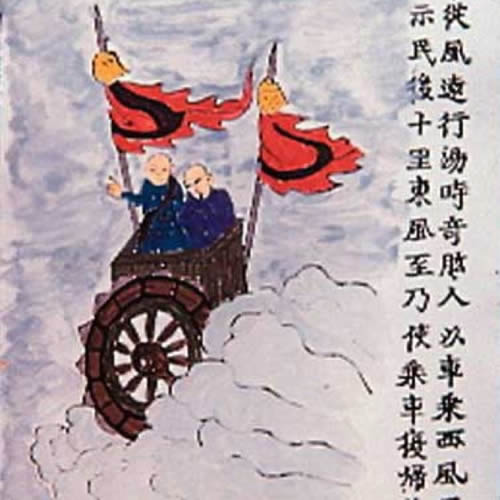 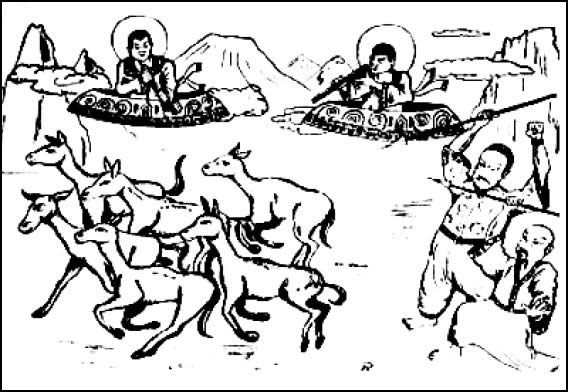 Artistic reproduction of a relief found in a labyrinth on the island Jotuo in Toengt’ing lake. 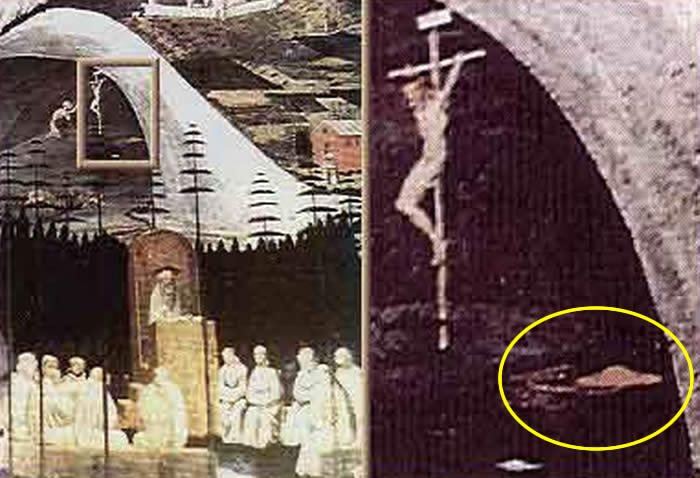 If you look closely at the painting “La Tebaide”, done sometime in the early 1460’s by Paolo Uccello, you can see a strange UFO flying saucer type object to the right under the cross. The painting is currently hanging at the Academy of Florence. 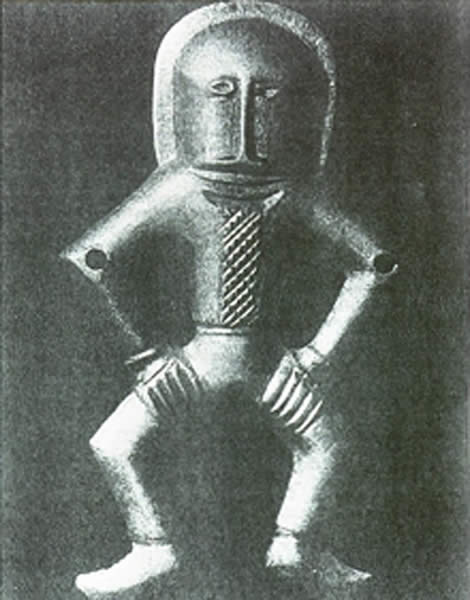 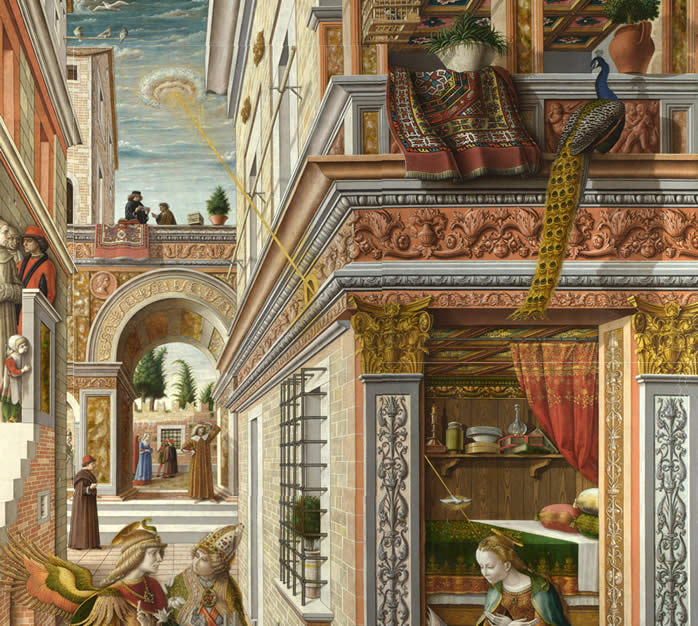 In this stunning painting, called “The Annunciation”, from 1486 by the hands of Carlo Crivelli, you see an amazing image of a UFO beaming down light toward a building, and through a window. A stream of light from God, or a message from somewhere beyond the heavens? 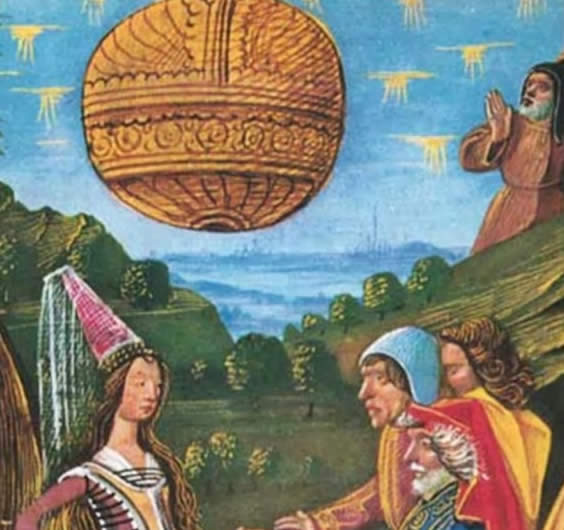 A french picture from the Literature ‘Le Livre Des Bonnes Moeurs’, by Jacques Legrand, a book of French works from 1388. Some speculate that the object was a balloon, but during that period in time, there were no such devices yet. 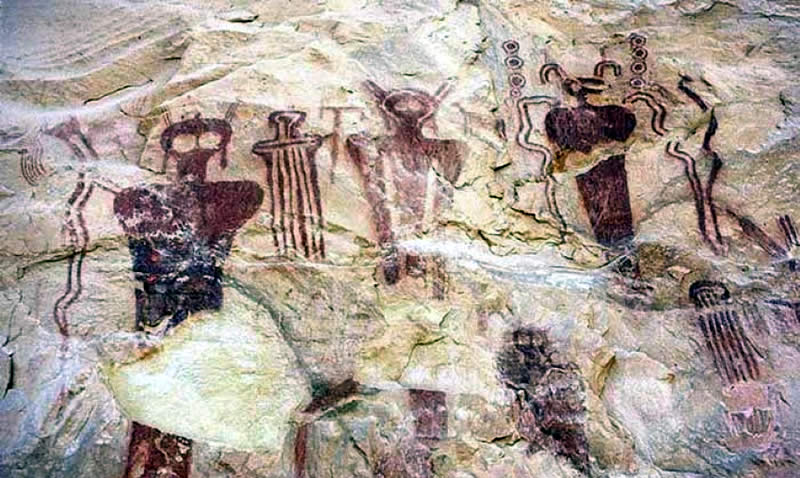 Sculptures from the ancient Incas, who were much more advanced than other similar civilizations of their time and area. Displayed are two flying saucers. The Inca civilization was in close contact with aliens. Their advanced mathematics, astronomical charts and calendars are attributed to extraterrestrial visitors. 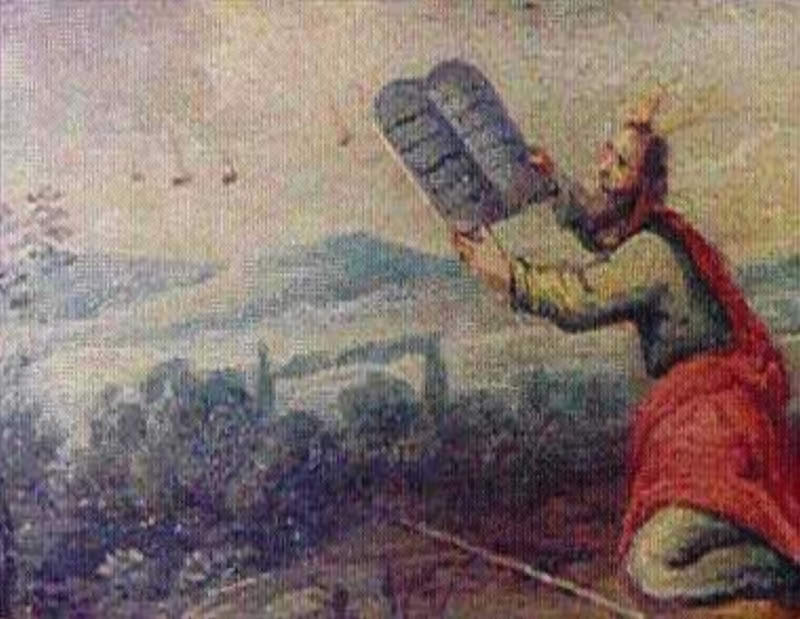 It is believed that aliens visited this planet long ago, helping advance civilizations, and steering human history. If Moses received the ten commandments from aliens, then many points of the bible, and other religions of the past, can easily be explained. This painting is from a wood drawer, kept at Earls D’Oltremond, in Belgium. 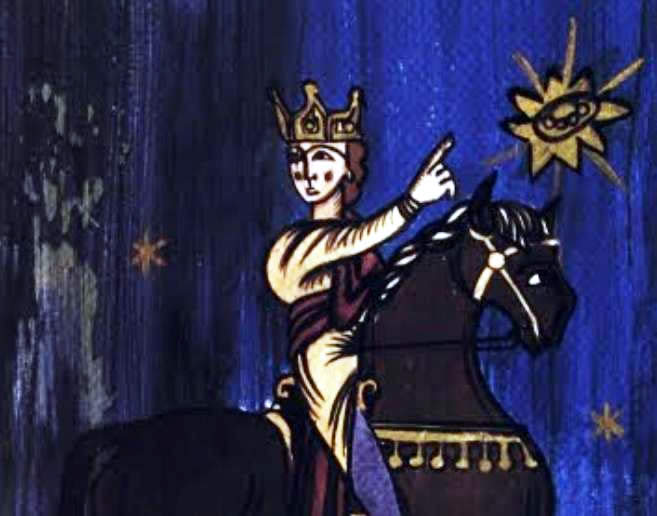 Illustration from the 12th century manuscript, ‘Annales Laurissenses’. It documents the siege on Sigiburg castle in France, in the year 776. The Saxons had surrounded the French, and were about to breech the castle, when ‘flaming shields’ appeared and hovered over the church. The Saxons, thinking the French were being protected by these beings, fled in terror. 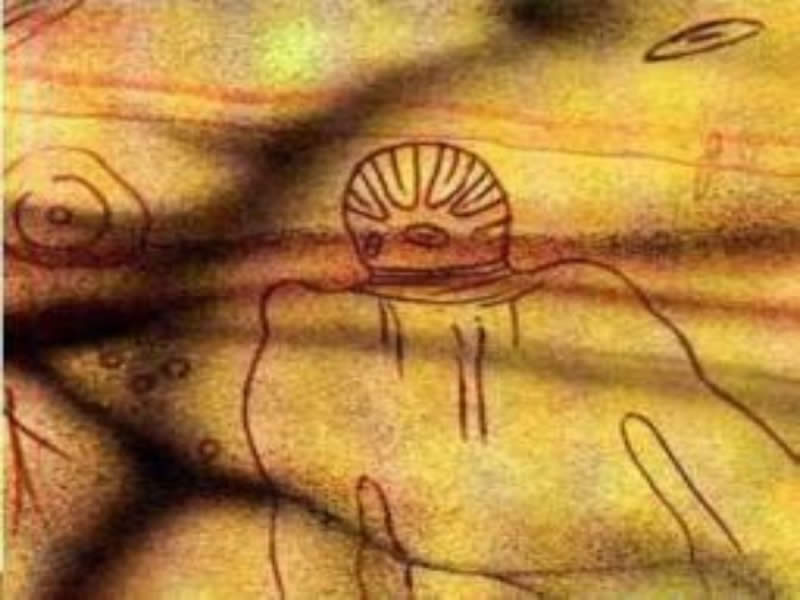 Cave painting 6,000 BC from Tassili, Sahara Desert, North Africa showing a being with a possible spacesuit helmet on as well as disk shaped objects above it. 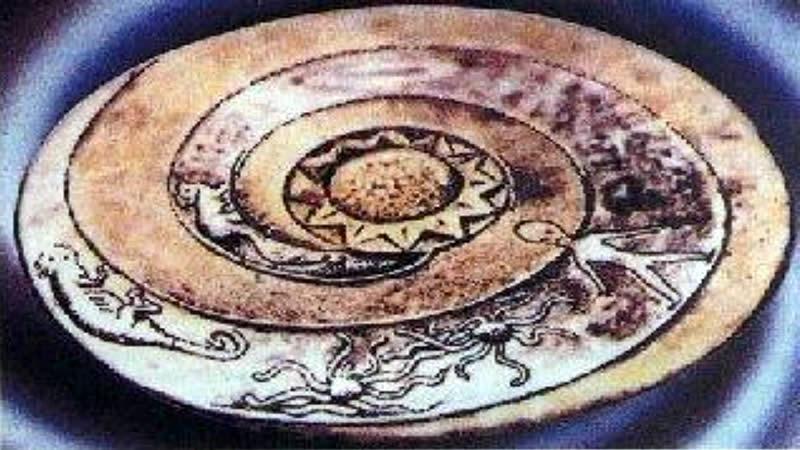 7,000 B.C. – The Lolladoff plate, discovered in Nepal, appears to show a hovering disk-shaped object in the center, and a small being beside it. The circular pattern is reminiscent of the spiraling movement of consciousness – Golden Ratio – Sacred Geometry of Creation. 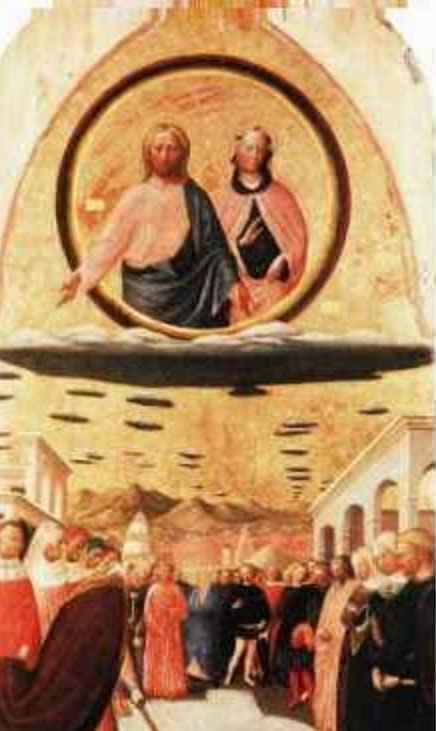 Entitled The ‘Miracle of the Snow’, this painting from 1388-1440, by Masolino Da Panicale, currently resides at the church of Santa Maria Maggiore, in Florence, Italy. It shows two ‘humans’ in a circle type cloud, hovering above the disciples. This could easily be interpreted spiritually, or, something more extraterrestrial, like them looking down from a hovering UFO.