Earth Was Chosen For Human Exile

Human Exile – Contrary to popular misconception, humans did not evolve on Earth. Humans were placed on this planet intentionally – the result of human exile. In every sense of the word this world is a prison planet, and we – aliens from outer space – are its inmates. We are extraterrestrials from other worlds who were intellectually imprisoned on prison planet Earth. Everything about us provides the hard scientific proof needed to verify that. And humans were exiled to prison planet Earth for very good reasons.

We Are Star Born

So who are we? We’re star born, the children of magnificent worlds that we’ve never known. Our ancestors once lived freely throughout the universe before human exile created a prison planet. We are the direct descendants, and distant relatives of extraterrestrials that still live among the stars. We once shared all the rights, responsibilities and technologies of those societies. But, our ancestors were exiled to Earth.

So let’s dispel a few myths. The first myth is that we evolved from apes. Science has proven that hominoids (monkeys and apes) have lived on this planet for a very long time. However, science has also inadvertently proven that our species, Homo Sapiens Sapiens (Cro-Magnon or Modern Man) have not. This is simply because human beings did not evolve on Earth. Humans were placed on Earth in order to maintain peace and protect intergalactic society.

The Human Species Is Not From Earth

If life exists on Earth, it must also exist on other worlds.

The second myth is that we are alone in the universe. It is ‘very’ probable that the source of life did not disperse throughout the universe selectively. Therefore, if life exists on Earth, it must also exist on other worlds. And the majority of alien life will likely share characteristics with life forms found on Earth. So the same creatures that once roamed this planet, and still do, are sure to exist on other planets with similar climatic and environmental conditions. In fact, our species was taken from planets that are remarkably similar to Earth.

The third myth is that Cro-Magnoids (homos sapien sapiens), our species, evolved in this star system. To date, there exists no hard scientific evidence anywhere in/on the world that proves our species experienced an uninterrupted evolutionary progression on Earth. In fact, according to our honest genealogy, anthropology and archeology, the origin of man is entirely extraterrestrial.

Therefore the theory of human exile declares Earth to a prison planet, used as such beginning when our ancestors were imprisoned here approximately 50-60,000 years ago. The reason for our exile was to isolate the intergalactic spread of our insanity, crime and murder. The same horrific propensities that humans still have and exhibit today.

So human exile to a prison planet was necessary because negative behavior seems to be an inescapable part of our who and what we are. Even today there isn’t a single human being who’s free of violent, lustful, vengeful, thieving and/or murderous thoughts, regardless of what they might lead others to believe.

The question why we weren’t simply genetically ‘repaired’ and then reintroduced into intergalactic society is often asked. There are two probable reasons: 1) Forced genetic modification of intelligent life forms is likely considered a horrific intergalactic civil rights violation, and therefore is strictly forbidden, or, 2) Previous genetic manipulation went terribly wrong and has been outlawed every since. 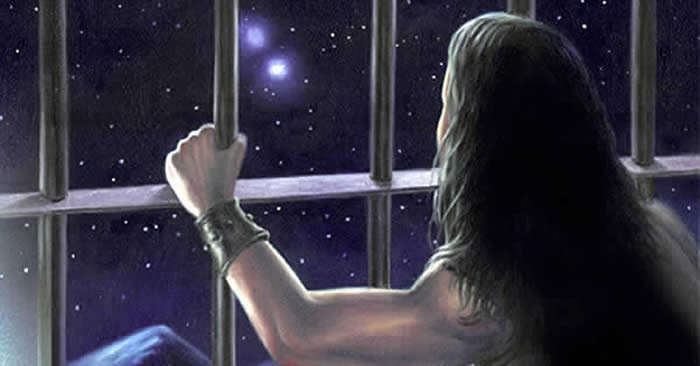 Future prisoner of Earth – Man looking through bars of window into outer space.

Threat To Peace In The Universe

Humans were exiled because we are a very real threat to peace in the universe. Finding an efficient and ‘humane solution’ to coping with persons violating the rights of others became an absolute necessity. Identifying and isolating those who presented problems took place. Our ancestors were selected for exile, and so began the origin of man on Earth.

It is important to note that we are all of the same species, with equal intelligence, but have different physical characteristics (such as size, skin color, etc.) from evolutionary adaptation to the planets that we once populated. Earth was chosen as a place to exile humans because of its remote location, varied climatic zones, and the ability to support hominoid life forms. Humans were stripped of all former memories and technology before exile, and were relocated to continents on Earth selected specifically for their similarities to the environments of the exiles former worlds.

Conditions For Human Exile To A Prison Planet

Our exile was to a prison planet far from intergalactic society, a span so vast that it would prevent, or at the very least, severely inhibit any outside interference that could and would trigger our technological development. But finding the ideal planet was not easy.
However an ideal planet with multiple climatic zones far enough away was located orbiting a star on the far outskirts of the Andromeda galaxy. A massive fleet of UFOs was assembled, our ancestors were loaded, and the long journey to exile humans on a prison planet began. 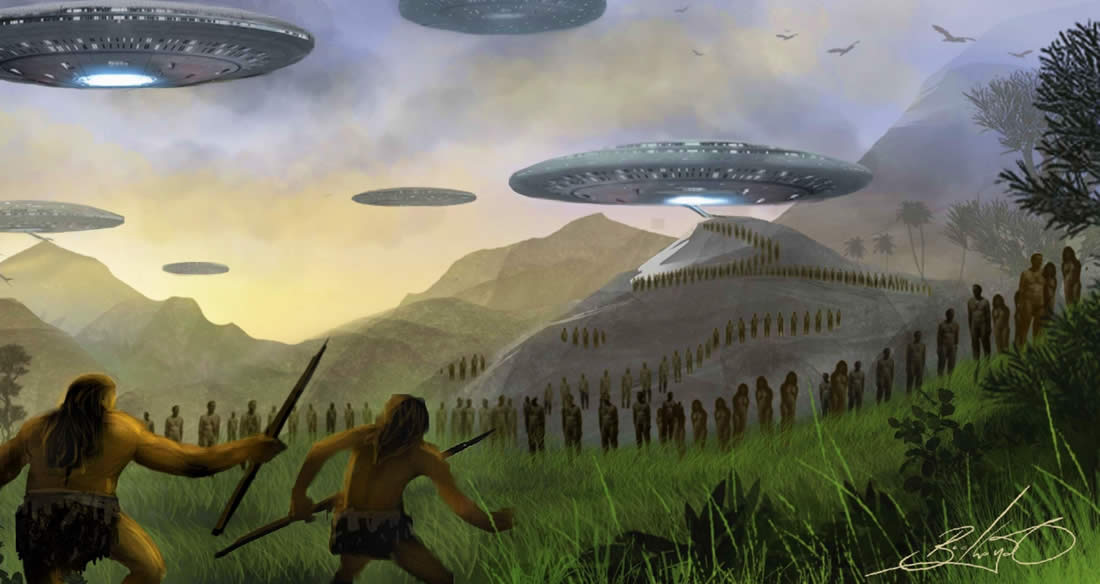 Prisoners were unloaded upon arrival, establishing human origin on Earth. Our history upon the prison planet Earth then began. After human exile was completed, monitoring and assessment started, with protection or aid to prisoners on Earth forbidden.

Our captors thought that if human exiles were to survive at all, they would be forced to revert to a primal state and build relationships (possibly even interbreed) with Earth’s native hominoid species. It was a belief that was proven to be very wrong. 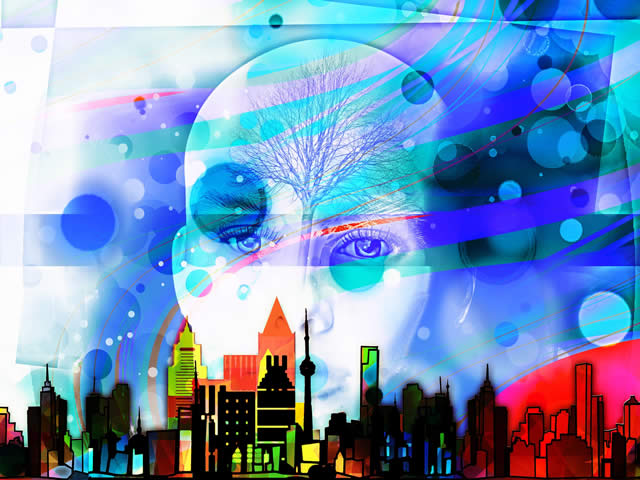 Initial monitoring of the humans exiled on Earth proceeded as planned. However, within a just a few decades it became obvious that some very serious oversights and assumptions had been made. Oversights and assumptions such as the belief that without technology and memory of former lives, the prisoners exiled on Earth would remain in a primal state. That belief was shattered when our ancestors began exterminating any and all perceived threats, and started creating an entire microcosm of interstellar civilization.

The sudden and unexpected appearance of Homo Sapiens Sapiens (Cro-Magnon or Modern Man) caused the global paleoanthropological and archaeological picture to change dramatically. This was partially because the exile of humans was so sudden, and on a scale so large, that it allowed them to drive Neanderthals, who had been at the top of Earth’s food chain for well over 350,000 years, to near global extinction in just a few thousand years.

Humans exiled onto the prison planet also brought abrupt and dramatic change to subsistence patterns (how food was gathered), the creation and use of tools, and symbolic expression (cultures) worldwide. This stunning change in survival and cultural adaptation was not merely a quantitative one, but one that represented a significant departure from all earlier humanoid and hominoid behavior, reflecting a major qualitative transformation.

Exiled humans on Earth caused a creative explosion of technological ingenuity, social formations and ideological complexity never before seen on the entire planet. It is important to note that the humans exiled on this world were not just anatomically modern, they were intellectually and behaviorally modern too.

This meant that for the first time in its history Earth became witness to art, architecture, animal husbandry, agriculture, written languages, advanced mathematics, technology, law, religion and government. Unfortunately, it also became witness to the atrocities of humans.

Human Exile Was Not Agreed To By All

Human exile was not unanimously agreed upon. From the dawn of humanity’s arrival on Earth, those who opposed our sentence have assisted the advancement of select civilizations. The assistance by aliens always resulted in dramatic leaps of intellectual ability and technological accomplishment. Unfortunately, virtually all of the civilizations that benefited from advanced technological gifts ended quite suddenly, and very often, tragically. Some civilizations seemed to vanished instantly using methods that remain unknown.

What we do know is that continued observation and DNA testing of human exiles by extraterrestrials was agreed upon, and continues to be carried out under strict conditions to this very day, with the number one condition being ‘no contact’.